Digitalization – A war between generations of professionals

Business digitalization is a hot topic today online, especially on professional social platforms like Clubhouse. When I hear or read about companies’ journeys and struggles in digital transformation projects, it’s like I hear the chorus of the “Video killed the radio star” song.

On one hand, digital and IT innovators fight to revolutionize workflows and infrastructures, while conservative managers usually come short in understanding the digital opportunity, especially if the business looks solid on paper (remember Nokia vs. iPhone?).

During this so-called digitalization war, many digital projects are canceled or fail, just like collateral damage in real combat.

The truth is that implementing new technologies and workflows will always be a burden for both digitalization promoters and detractors. But just like the industrial revolution, digitalization brings clear benefits to a company. Let me picture it better for you.

Digitalization benefits for your company 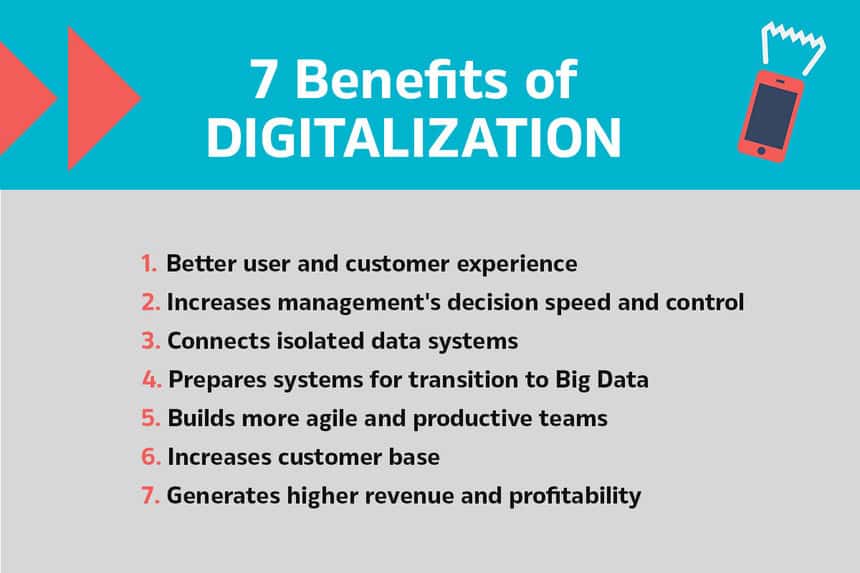 The top 7 benefits of digitalization are:

Let’s try to be practical and look at how companies collect user feedback via phone lines. In almost every market, there are companies that did not set up yet digital call centers with IVR.

A similar situation was at Synevo Bulgaria in 2018 before I joined the diagnostics company as marketing director. After setting up a new omnichannel marketing strategy oriented towards the consumer instead of doctors, the strong inbound marketing plan needed all traction channels ready. Synevo Bulgaria Facebook page had Messenger (and it was working great), but all the other contact points needed a call center and at that time, each Blood Drawing Point (BDP) had a separate phone number for receiving calls.

This needed to change, as the marketing strategy had the website Synevo.bg to become the no.1 educational website on the medical laboratories market. I gathered offers from different providers and I found the perfect solution, a top local provider from Sofia. A few months later, the call center and IVR was live, proving with numbers to be a great success:

My efforts to convince some of the managers that IVR was the only way forward paid of. Today my persistence to change the status quo returned important benefits: better-served customers, higher revenue, and profitability.

Besides the new IVR, first I rebuilt together with Synevo Bulgaria’s Medical Director Tsvetelina Velikova the portfolio of 1,000 laboratory tests and packages for eCommerce, launched a new website strong in Content Marketing & SEO, launched the first web store on the market, and relaunched Synevo Bulgaria’s presence in Social Media.

The synergies between all these digital systems started to pay off immediately, delivering additional revenue that turned the company profitable for the first time in many years – see the case study here

Digitalization is a team effort

Experience shows that the key to successful digitalization is not only the process itself nor the belief that it moves a company forward, but to have a solid, aligned senior team.

Digitalization and digital projects require open-minded managers, agile project managers, and the cohesion to plan the project as a business case.