How often digital projects fail or get delayed and why

Digital projects are the bricks of the bigger structure called Digitalization. If a digital project fails, the entire transformation project suffers.

You cannot have a house without them, on the other hand, they need to be part of a plan. This may sound to you a bit theoretical, but when you have an active part in a digitalization process, as I am in the divisional marketing team of Medicover, you can see both the plan and the bricks.

According to a 2019 survey performed by IT company Couchbase, 81% of companies included in the study admitted that in the past 12 months they had failed digital projects, initiatives that were set back significantly.

The subjects included in this executive survey were 450 heads of digital transformation in enterprises across the U.S., France, U.K., and Germany.

Why do digital projects fail or face delays?

First, let’s start with the positive side. Digital innovation shows significant benefits in terms of User Experience, a statement valid for 70% of the companies. I witness digitization success and the rewards are fantastic, certified by higher NPS scores, nicer customer reviews but also more revenue. 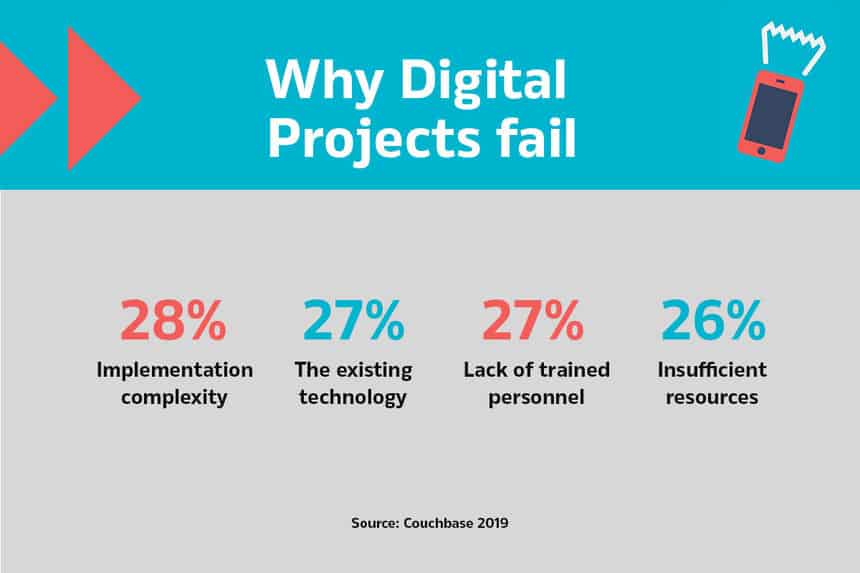 The main reasons respondents gave for project failures and delays are:

So next time you think “digitization” or “digitalization” for your company, make sure you check all these 4 requirements.

As I mentioned in the previous article, building the right team is essential in planning your company’s digitalization.

You may consider also an external company that would audit your company’s internal systems, processes, and business.