I don’t know about you, but I’m very interested in street Outdoor Advertising, especially in the big formats such as meshes and digital billboards. In the last two decades, I have seen this medium transform, with more and more digital formats in bus shelter locations, but also bright big screens placed on buildings, in large public squares, and malls.

Outdoor advertising is very very catchy, and sometimes critical for the local communities, as advertisers can promote their brands in the most relevant areas of the city. Outdoor advertising and billboards are part of outbound marketing and very often are included in the so-called “classic” advertising media. However, given the new digital formats used by media companies, it’s hard to say that all outdoor advertising is classic. 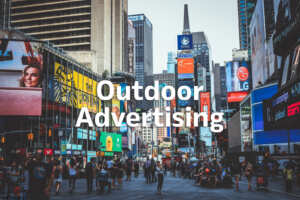 Why is outdoor advertising important?

Billboards can be a very strong way to build awareness in traffic for a brand or for an outlet, as it is very compelling in attracting customers.   There are many companies that are relying on billboards as an advertising medium, especially the ones that can find easily their target groups in receptive (buying) mode or the ones that sell products that can be used outside, such as cars and umbrellas.

Outdoor advertising is usually placed in high traffic areas, such as public squares, tall buildings, highways but also at pedestrian level in areas such as shopping centers and bus stations. The biggest advantage of using outdoor advertising by marketers is that it is able to build fast brand awareness and to promote commercial messages to a large number of people in a short period of time.

The cost of outdoor advertising

Outdoor advertising has gained the reputation as one of the best CPM (or a cost per thousand) views among current advertising formats.

The individual cost of a billboard or mesh depends on several factors, but most especially the level of demand for that specific location. Of course, the demand for an outdoor advertising location depends further on the traffic in the respective area (which can be translated into an estimated audience size), the visibility of the billboard (how it’s placed vs. the traffic flows), but also the level of spectacularity (some formats are better lit, some are digital, or some are placed in the vicinity of important tourist or commercial attractions).

The cost structure of a billboard is usually split into five categories:

For example, if a company decides to rent a certain billboard for a year, but changes the layout every 4 weeks, the decoration and neutralization cost will be added more frequently than the monthly rental cost (every 28 days vs. monthly).

Outdoor vs. Out of Home  vs. Billboard advertising

Billboard advertising, out-of-home (OOH) advertising, and outdoor advertising are similar terms, as all three aim to reach potential consumers when they’re not at home.

In Europe, the most popular term is “Outdoor Advertising”, while in the US is more used the term “billboard advertising”. In media and advertising agencies, the most used version is OOH (or Out of Home) advertising.

For example, big advertising and media creativity festivals such as Cannes Lions use the term OOH (out of home) for awarding creativity in this category of advertising.

According to movia.media website, the largest outdoor advertising companies were:

What factors determine the cost of outdoor advertising?

How can you make your Outdoor Advertising successful?

There are a few rules of thumb that you should consider for making a billboard ad successful. Some of the rules apply to all the billboards in your campaign, but some only to them, so be flexible with your creative approach.

The hardest challenge for a creative person is to translate a marketing message in an outdoor ad, where you should limit yourself to having a 5 to 7 words headline that is compelling enough. For this reason, make sure you include in your creative brief the need to have this type of medium exemplified in the campaign proposals.

Understanding the Client Brief for a pitch

For this, every decision-maker involved in creating the final ad needs to apply a “reduction” creative technique that allows ditching all unnecessary copy or visual elements.

The most striking billboard ads are the ones that allow car drivers to get it without getting too much distracted from the steering wheel. In order to achieve breaking this clutter, a bold short headline and a magnetic visual background or image are mandatory.

You could say that a billboard that is part of a 360 campaign should be the “emulation” of the big idea behind the brand, its shortest version so be very demanding when approving it.

Rule #3: Blend with the surroundings.

If you have a premium location, research what is around that location, including other billboards. Take into account the neighborhood, which could boost the relevance of the ad multi-fold.

Some billboards or meshes allow advertisers custom designs and structures that make it more dynamic or allow them to interact with the audience or the surroundings.

You won’t manage to have an outdoor campaign only with customized billboards, but try to break the noise and grab people’s attention. Your brand will stick out and be more memorable than the others.